In the spring of 2020 I found myself without a cat, a most unusual occurrence for me. So as Covid took over our lives I longed for the companionship of a furry friend. I searched the websites and finally on July 3, 2020 I acquired not one but two kittens. I named one Poppy and the other Dandy – short for Dandy-lion. They have been wonderful company over the past year and became the inspiration for the kitten in my new novella, Courting Cordelia which came out last month.

My Poppy is a ‘tuxedo cat’, because of her characteristic black and white markings. She’s also very talkative, as is the kitten in my novel. But it’s Dandy, my ginger tom cat, who gave me the idea for a wanderer who always goes where he shouldn’t. So Cordelia’s Poppy is a blend of my two. I hope you enjoy getting the cat’s point of view, especially in romantic situations. As is the case with most cat owners, I’m now completely ‘under the paw’ of my two kitties. Heaven forbid that I should ever run out of their favourite cat food!

My latest release, Courting Cordelia, can be found on AMAZON

A young lady, in Regency London, would see the end of the social Season fast approaching. Most families migrated to the seaside, at Brighton, or to their country estates by the end of June. If she had not received a proposal of marriage from a promising admirer there was still hope. Matchmaking mamas planned country house parties very intentionally for this purpose. ‘Grandon Hall’, my first novella, has a description of just such an event.

On Saturday, July 7th there will again be a challenge made to the Guinness Book of Records for the greatest number of people gathered in one place, at one time, dressed in Regency costumes. With the eighty member cast, fully costumed, from Chicago, added to our 302 members last year, there is a very good chance for victory this year.

On Saturday the 7th, a Regency tea will be held and in the evening a Regency candle-lit masked ball. Rosemary Lach, a JASNA dance teacher, will be putting us through our paces. Only someone with truly two left feet will feel lost under her skilful guidance. The weekend ends with a Regency picnic and an outdoor dance on Sunday the 8th.

I have taken my gown to the seamstress for some improvements and will be adding lace, ruffles and more flowers to my hat. I will have a table at the tea and would love to meet you. Do come. It will be such fun.  Here are some pictures from last year’s event. 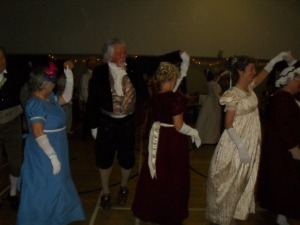 I have a confession to make regarding my last story, “Not Quite a Lady”. My heroine, Ruby Gillingham went to London to stay with her aunt, Lady Paxton, who offered to sponsor her debut in London’s Little Season. This was a round of dinners, military reviews, musicale evenings, theatre parties, masquerades, picnics, al fresco breakfasts and balls designed to introduce ladies of gentle birth to eligible young men – object matrimony. But before you could embark on the Season you had to first be presented at court.

I carefully researched the criteria necessary to be eligible for court presentation. First of all the lady had to be of good moral and social character. Secondly her sponsor had to be someone who had herself been presented, in Ruby’s case it was her Aunt Ada. And finally her status in society. Being the daughter of a country gentleman made her eligible but I knew that Ruby wasn’t going to stay in London for the full two months of the Little Season. It began in September and ended the beginning of November, when fox hunting began. She left halfway through.

Court presentation required a lengthy process starting with submitting the candidate’s name to the Lord Chancellor, waiting to hear if she was chosen and once she received the summons she had three weeks to order her required gown and practice the complicated court curtsey. Given the time Ruby actually spent in London I didn’t think it would work so I omitted her presentation. I apologize to my readers since I do strive for historical accuracy. I promise not to take a shortcut again. 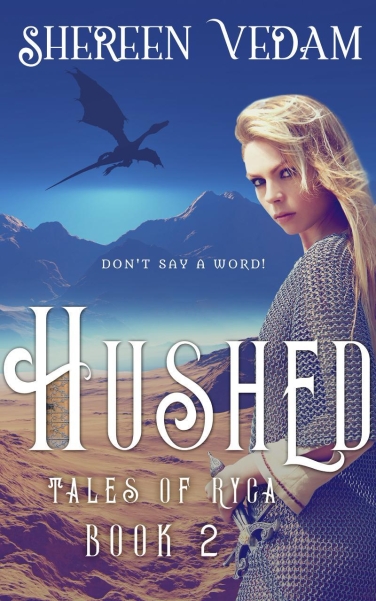 Hushed
Don’t say a word!
In one day, young TAMARA goes from being the king’s favorite, his first born and much-loved thirteen-year-old daughter, to having her father brutally murdered. Then she’s trapped by a time spell where no one hears her screams. Once she’d finally freed, she’s determined to stay that way. So, when she turns eighteen and her mother attempts to marry her off for “her own good,” Tamara is having none of it.

However, is going on a quest across realms to find her lost nephew the best plan? She’ll meets marauding giants and wily talking lizards. She’ll have to face spirits who should know better than to leave their graves and resurrect memories best left buried. Most important of all, she’ll have to come to terms with her greatest weakness, or strength, depending on her point of view. All the while, in the stillness a danger lurks that could destroy the rest of her family, and perhaps even her entire world.

For once, will Tamara be up to the task of being the one to save the day?

Pick up a copy today 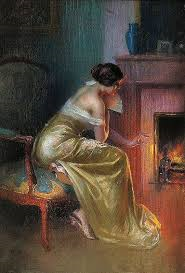 Autumn comes in a blaze of scarlet, gold and the purple of Michaelmas daisies. What would Regency England do to mark the change of the seasons?

Old Michaelmas Day, October 10th on the Gregorian calendar, was one of the quarter days of the English year. It marked the last day of harvest and the end of the productive season. It was a time when debts came due, servants were hired and land changed hands. Michaelmas was also known as Goose Day. To this day Goose Fairs are held in Nottingham.

But what about turkey – you may well ask. Not in this time period. Goose was the bird for feasting. Eating goose at Michaelmas guaranteed luck and prosperity in the coming year. If a tenant farmer hoped to get an extension on his rent, the gift of a fat goose might do the trick. 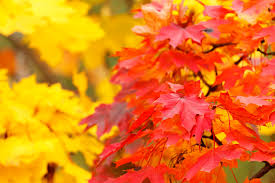 Hallowe’en had its roots in the Celtic festival of Samhain which, like Michaelmas, was linked to summer’s end and the start of winter. Blazing bonfires, feasting, drinking and dancing were part of the celebrations. In an attempt to convert the Celts to Christianity several Catholic popes decided to merge Celtic celebrations with existing Christian holidays. Thus November 1st became the Christian Feast of All Saints and All Hallows’ Eve was born. By the sixteenth century the word Hallowe’en was in common usage especially in Scotland.

It was a time when the living honored and prayed for the dead but pagan beliefs and superstitions were added. In rural areas the darkness of Hallowe’en was considered a very dangerous time because it was believed evil spirits as well as the dead, with unfinished business, could walk again. Lighted Jack o’lanterns were carried to scare away supernatural beings but they were carved from turnips or mangelwurzels, a type of beet. The name Jack o’lantern came from the Irish legend of Shifty Jack, who was so evil that even hell wouldn’t take him and he was doomed to eternal wandering.

Then on November the 5th, 1605 Guy Fawkes attempted to blow up the English house of parliament by filling the basement with gunpowder. His plot was foiled but it became the custom to commemorate Guy Fawkes Day by lighting bonfires in every town and village – very much like the bonfires of Celtic Samhain except that now they were a Protestant celebration. I cannot fathom why they named the day after him. After all he was the culprit.

Hallowe’en was pretty well ignored in Regency England but in the Celtic areas of Scotland, Wales, the Isle of Man and Ireland it would be a night of bonfires and fortune-telling, mostly focused on courting games. One of the most common was the nut-crack. The heroine tossed several nuts into the fire with the names of her suitors scratched on them. The one which burned the longest and brightest would be the most true to her. A different version would have a couple each toss one nut into the fire and see if they burned together or jumped away from each other.

Another popular game was bobbing for apples. A blind-folded player would try to bite an apple floating in a tub of water. The initials carved into the apple would indicate a future spouse. Reading apple parings was another divining method. A woman would peel an apple keeping the paring in one long coil, then she would toss it over her left shoulder. When it landed on the ground she would inspected to see what initial it made – giving a clue to the name of her sweetheart.

An autumn dinner party in the Regency would likely include a roast goose and a variety of ginger desserts which were considered Michaelmas treats. And then on Hallowe’en, if you lived near the Scottish border or other traditionally Celtic areas, the courting games would begin by the fireside.

In Regency England ratafia was considered a ladies’ drink. Men preferred claret, burgundy and port. So what is ratafia? Georgette Heyer describes it as a liqueur flavoured with the kernels of apricots, peaches or cherries. While Cooley’s Cyclopedia of Practical Receipts, 6th edition 1864, defines ratafia as a ‘generic name in France of liqueurs compounded of spirits, sugar and … the juices of fruits or kernels [thereof].”
This brings me to my home-made version of Blackberry Ratafia. It’s been a good year for blackberries. I pop a sun-warmed berry into my mouth and wait for the burst of flavours – sweet, tart, juicy – with a crunch added by the seeds. I pick as many as I can before my scratched arms and legs rebel. The vines are incredibly tenacious. They put down roots wherever they touch the ground and will trip you when you’re not expecting it. 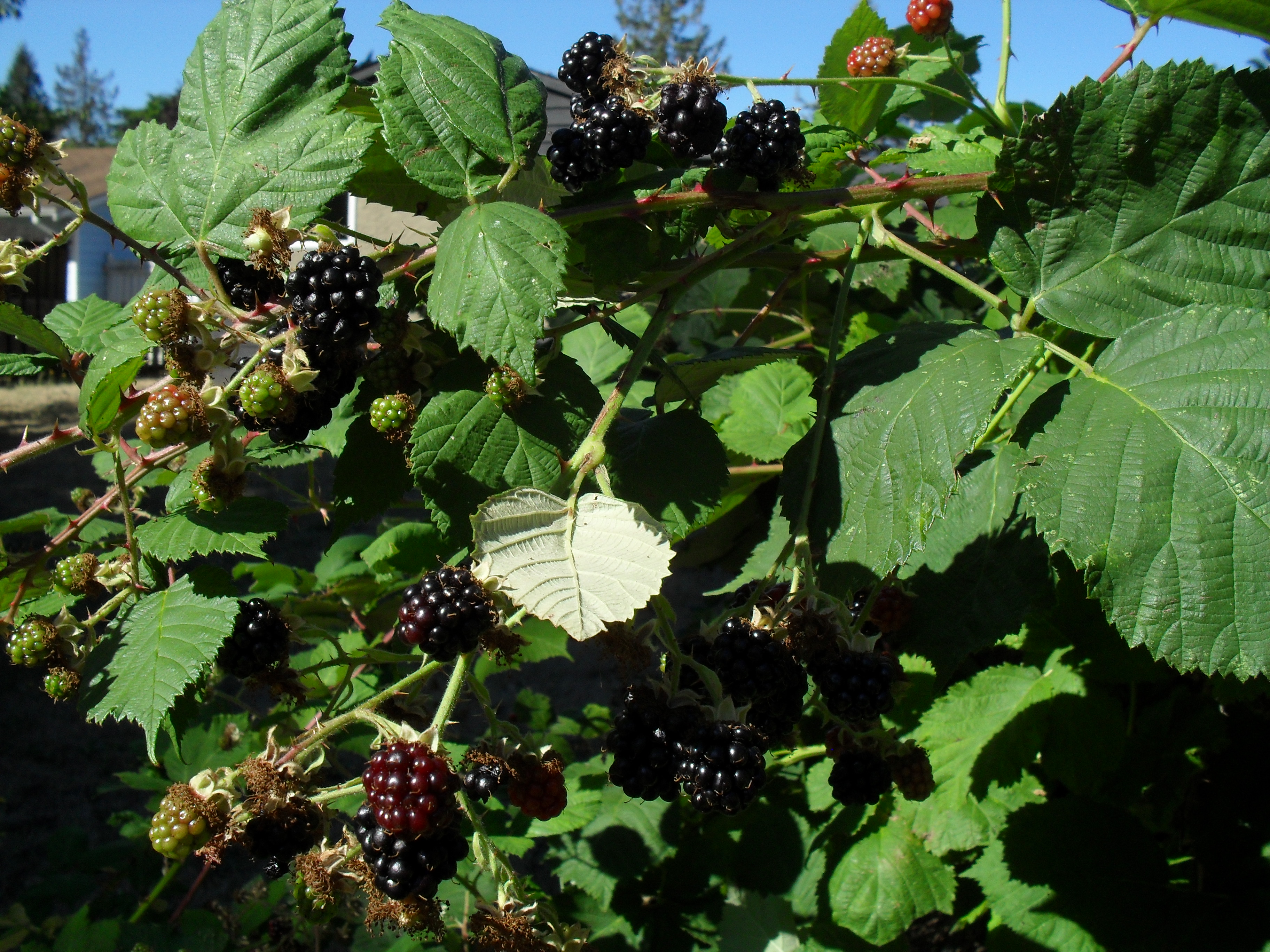 Now about my blackberries. I freeze most of them for pies, muffins etc. But I put aside a goodly portion for my ratafia. Then I assemble the ingredients: sugar, vodka and a jar with a sealing lid. My recipe is flexible. If the summer has been hot, the berries will be sweeter so I use less sugar, sometimes up to half a cup less. Here is my basic recipe:

When assembled I let the mixture sit on my kitchen counter for at least two months, stirring the contents of the jar, occasionally with a sterilized spoon. As we approach the Christmas season I decant my brew. I use a sieve lined with cheesecloth but you can also use a coffee filter. The result is a clear purple liqueur with an earthy blackberry flavour. It makes a lovely gift in a small decanter but I usually keep most of it for my own family. I have even been known to smuggle a bottle onto an airplane in my suitcase. I think the Regency ladies would have enjoyed sipping this luscious potion and likely they did.